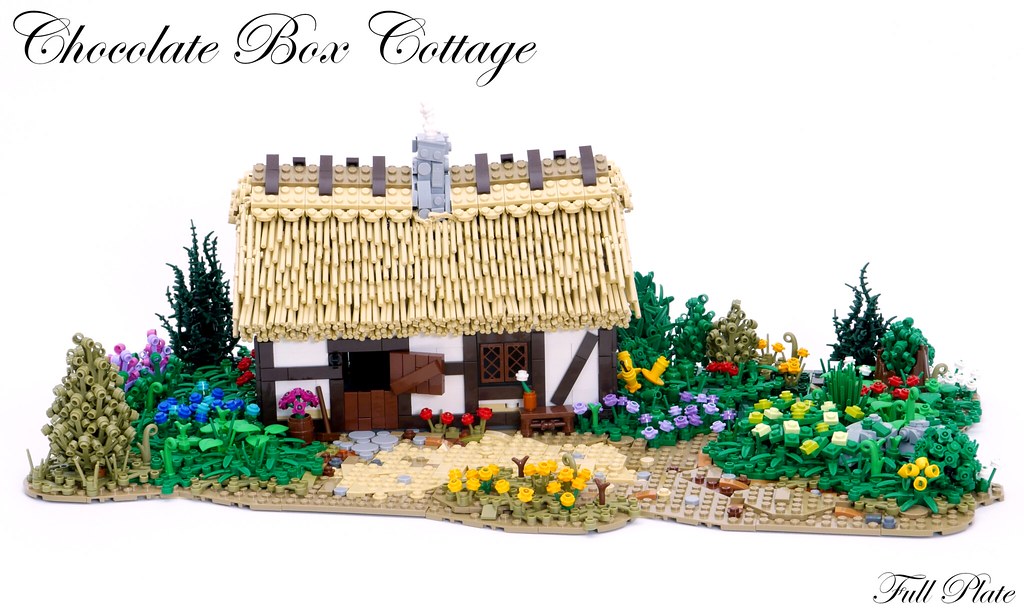 So from what I understand (and you may correct me, especially if you are British 🙂 ) the term ‘Chocolate Box Cottage’ refers to a picturesque, sentimentally appealing countryside cottage. I first heard the term while me and my wife were watching the awesome BBC TV-show ‘Escape to the Country’ – a show where prospective buyers get help to find a home in the countryside. An overwhelming majority of the people on the show seemed to look for a home that is ‘Chocolate Box’, which usually meant a thatched, half-timbered cottage with beams, low ceiling, inglenook (which seems to be some kind of walk-in fireplace) and a pretty little garden.

The show was essentially the inspiration for this build, and hopefully it has done the term ‘Chocolate Box’ justice 🙂

I actually built most of the cottage almost 2 years ago, but couldn’t manage to build a nice roof for it. So since then it has been sitting on a shelf at home and from time to time I’ve been thinking of building a proper roof for it. Then about 2 months ago I found tan 1×1 clips on the Copenhagen Pick-a-Brick wall, and got the idea for this roof technique. It’s quite intricate and uses more than its fair share of clips and bars, but I think it looks quite realistic 🙂

Technically, the roof is probably the only novel element of this build. The nature is pretty similar to many of my other builds, and the cottage is honestly quite dated. The composition is ok, but I had a few measurement constraints which made the area in front of the house slightly smaller than I would have liked and also ruled out the use of any taller trees.

This build will also be part of my return to Guilds of Historica over at Eurobricks, where I got started with lego building a few years ago 🙂 Just have to write a good story for it first, but I’m quite excited to build some medieval themed builds again 😀

Hope you enjoyed the build! I certainly enjoyed building it, except perhaps attaching all the bars to clips 😉

One thought on “Chocolate Box Cottage”