The park is the go-to spot for outdoor activity in the city, especially during the summer. Whether you are going for a run, flying a kite, having a picnic or just taking a stroll, the park is the place to do it.

This was my entry for a contest arranged by Swebrick, and the task was to build a city block according to the moduverse standard. Because of my preference for building greenery I decided to build a park. 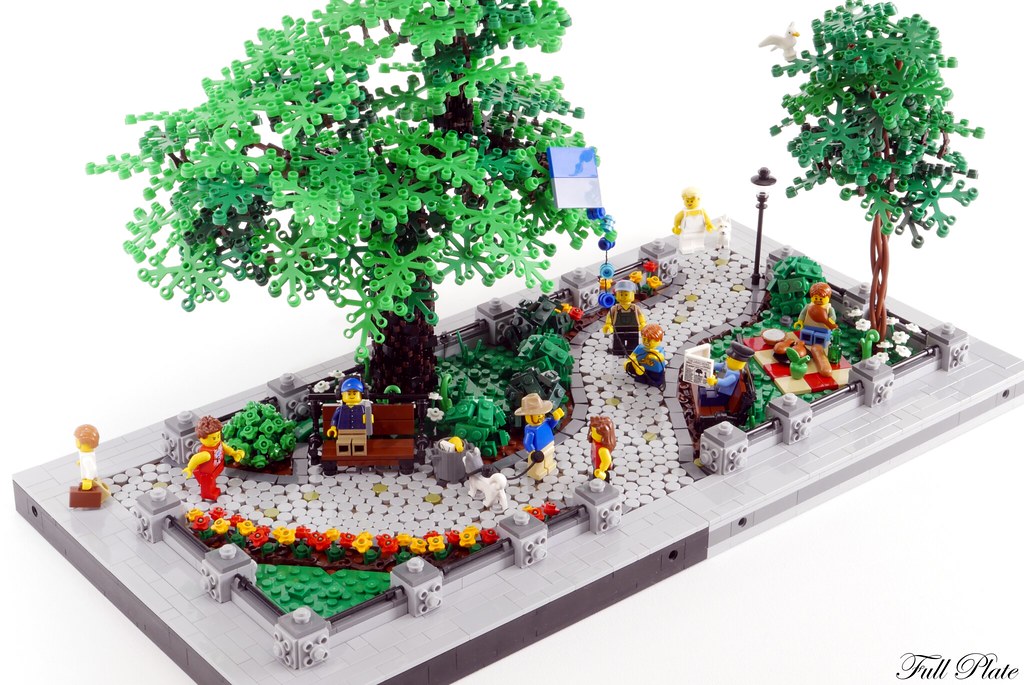 It has been a while since I’ve built anything in minifigure scale, but it was certainly a lot of fun, especially designing and posing minifigures. My kids were very eager to help put the characters together and came with suggestions as to what can happen in a park. 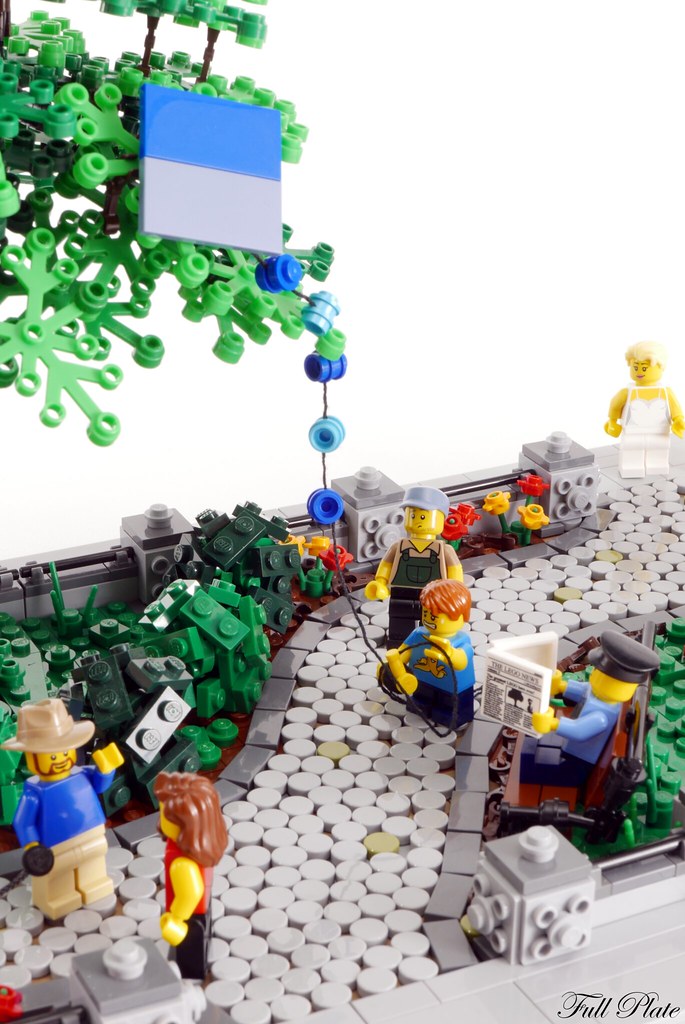 The cobblestoned path is the central feature of the park. Shaping the path was the first thing I did, in order to get an understanding of what I could fit into the different areas of greenery. I wanted a rather flowy shape to the path and I’m quite happy with the result.

The cobblestones themselves are essentially loose 1×1 round tiles lying on a tiled base. In order to prevent the tiles from arranging themselves in patterns too much, I had to anchor some to the base. 1×1 round plates was used in the places where minifigures would stand. 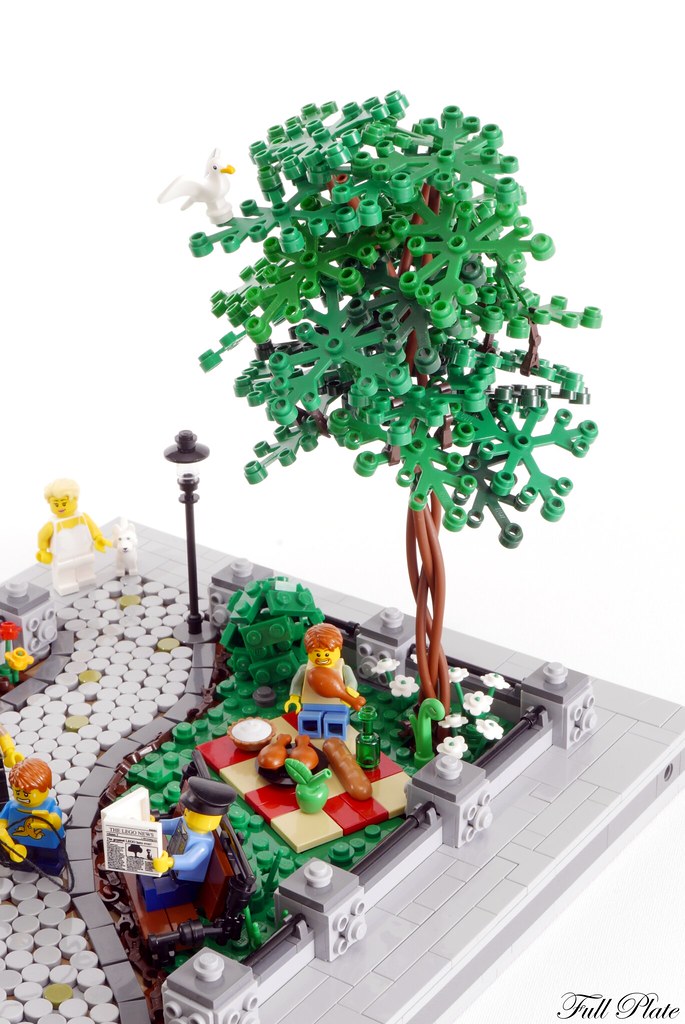 The stone wall around the park was another feature that I felt was quite important to the overall feel of the park. At first I thought of creating a rather fancy and intricate stone wall, along the lines of Jonas Kramm’s wonderful creations. However, I eventually realised that such a wall would clash with the theme of the park, which is a place where anyone can come and hang out, as opposed to an exclusive feel. So I went with a simpler, grey stone wall which I feel was more in unison with the rest of the build and did not steal attention from what was going on in the park. 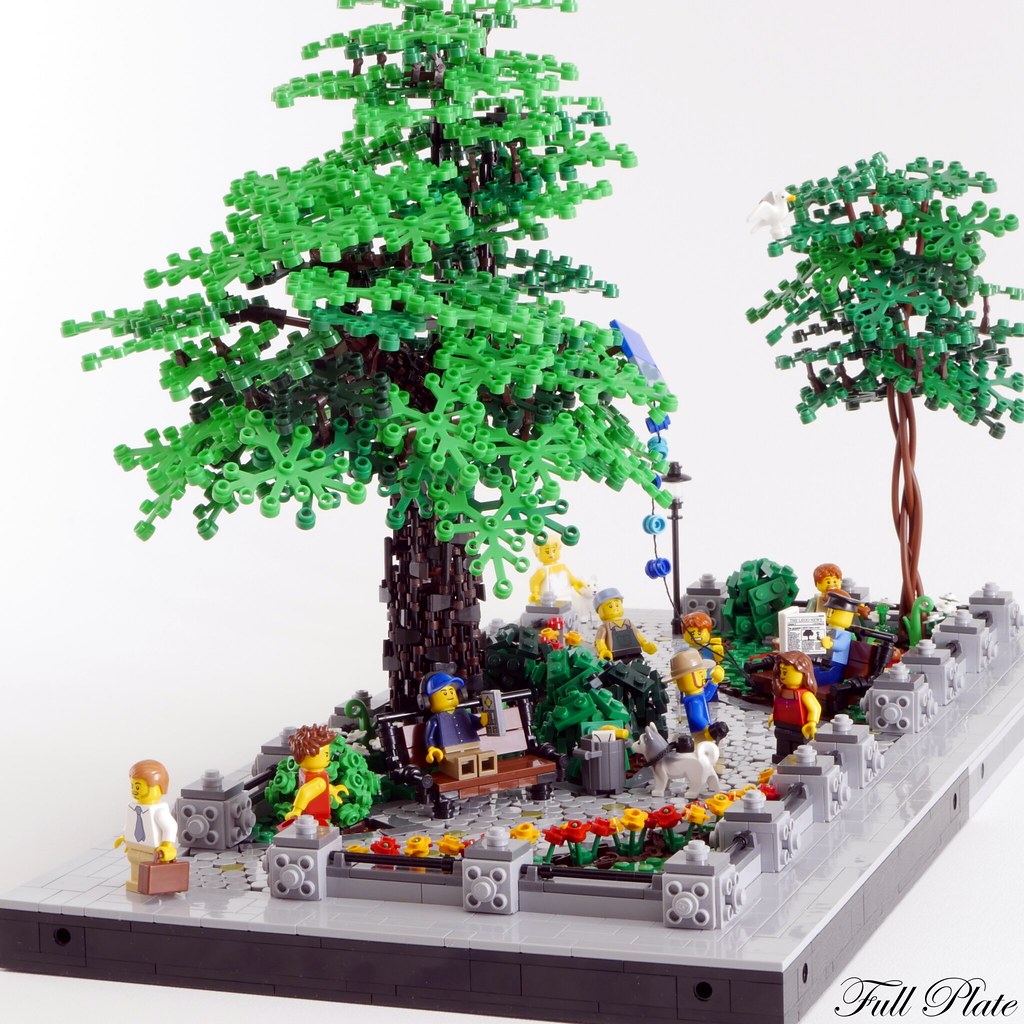 The big tree, which I call the ‘Axe Tree’, is the same design as many of my previous minifigure scale trees. The bark essentially comprises of axes and droid arms, and if you are interested, you can check out my tutorial on the technique. The smaller tree is a technique I haven’t used before but which seems to be quite widespread. It’s basically a number of intertwined flextubes held together at the top by leaf elements. 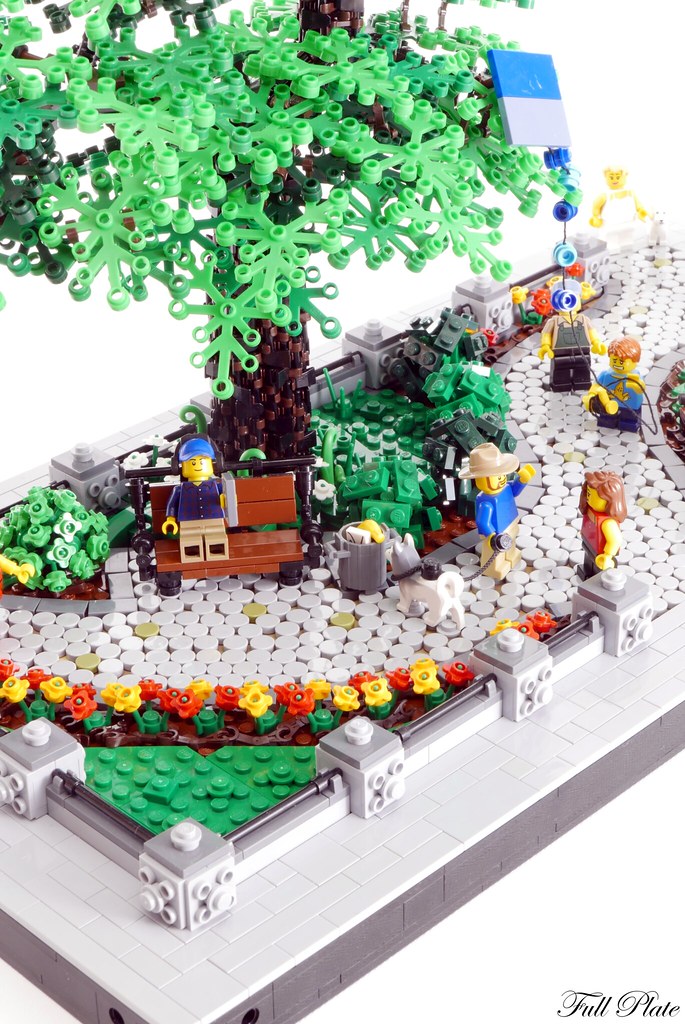 The bushes use the same technique as many of the microscale trees from my previous builds, and I have made a small tutorial on how to build them for those who are keen to try.

Other interesting elements of the build were the park benches, the picnic mat and the little kite stuck in the tree, the last of which I’m not quite happy with as the shape of the kite is a little off. Hopefully it is still clear what it is though.

All in all, I’m pretty happy with the build, especially as I did not invest too much time in it and did not have to order any pieces specifically for it. It was just a fun, relaxing build 🙂