When Swebrick revealed that the theme for their next contest would be “Under the Surface” I immediately knew I wanted to build something linked to ocean pollution. The idea was to create a build where the top would look like your ordinary tropical paradise while the bottom would reveal the true state of our oceans. 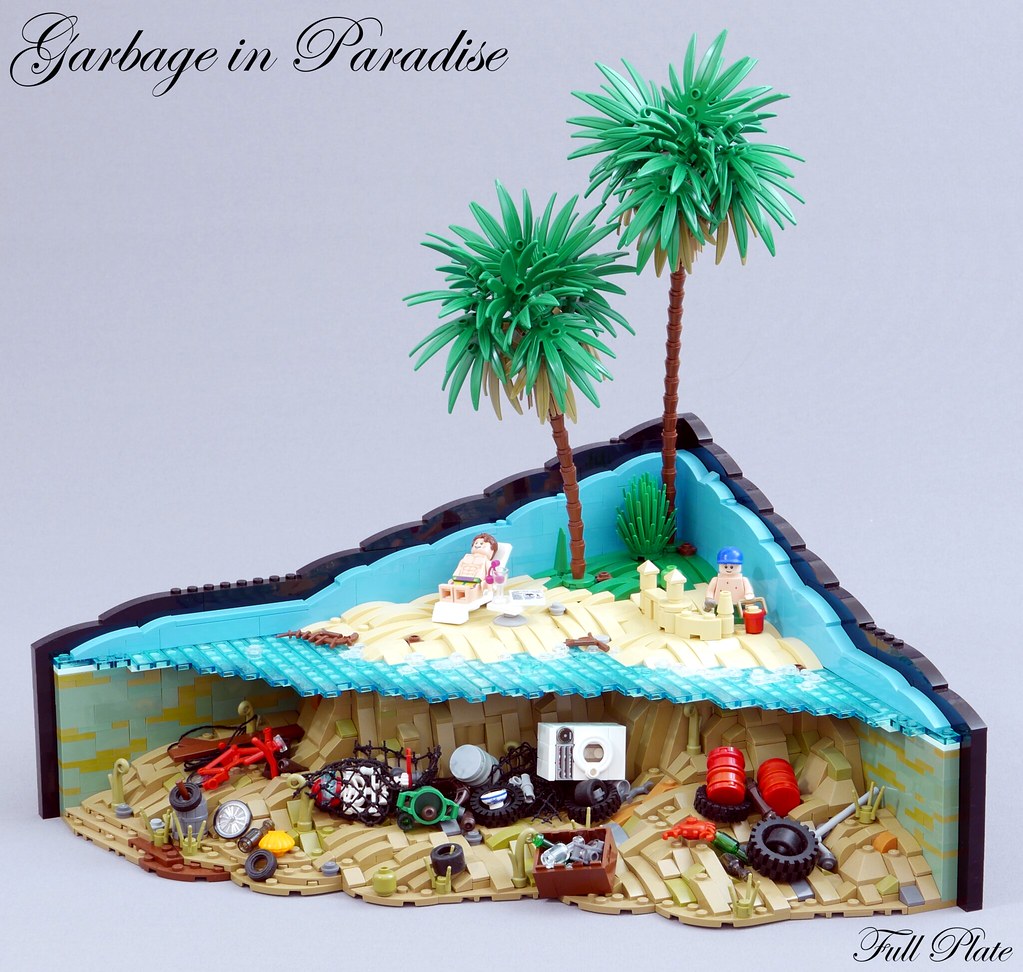 Building the top part was pretty straightforward – just make a nice looking beach with people enjoying themselves. The settled for a quite small beach, because ultimately the build is about what’s under the surface. I’m quite happy with how the sandcastle turned out, much thanks to 22388 now being available in tan.
I haven’t built these types of palm trees before, but I’ve seen them around in quite a few places and I think they look great. I probably diverged from the standard design by using green 30340 to clip the leaves on, but I think it turned out pretty well. Having one layer of olive green leaves at the bottom also makes a smoother transition to the dark tan bush.
At first I hadn’t planned to use any kind of backdrop, but I felt the gloomy colours of the sea kind of took over the build which detracted from the beach looking nice, so I decided to add one. 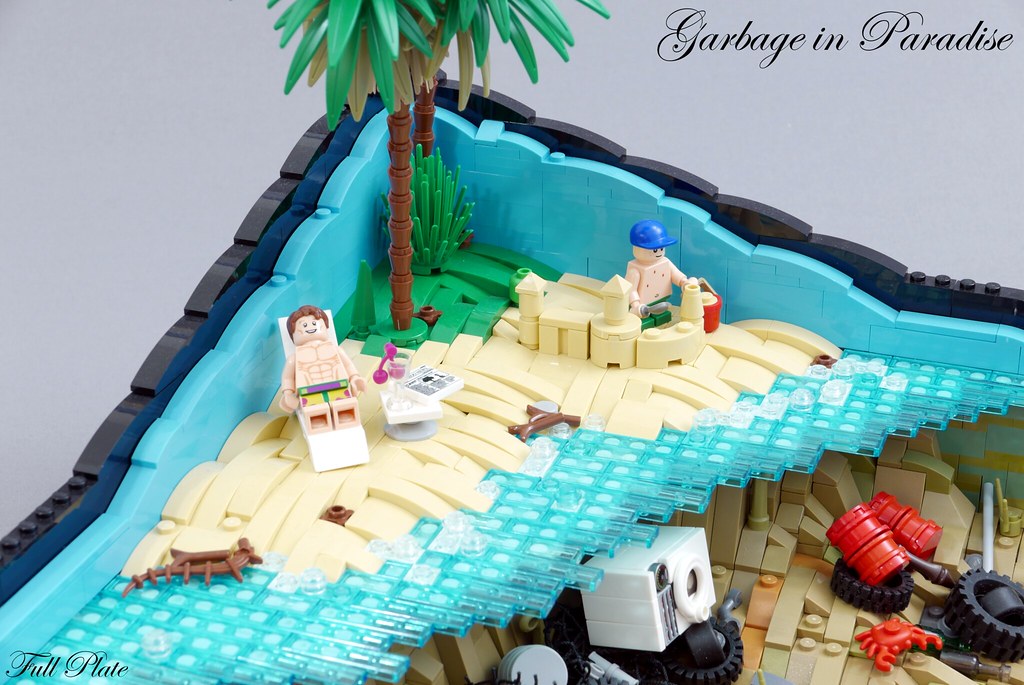 The ocean floor is what this build is all about. I actually spent quite a bit of time trying to make a nice looking bottom, but in the end I think much of that time was wasted since the garbage was going to cover most of it anyway.
The beach is unnaturally steep, but having a normal inclination would have spread out the build too much, and it would have been much harder to make the cut off water surface stretch out all the way over the garbage.
For the colors I went with a mix of olive green and sand green for the water, while the ocean floor is mostly dark tan with some added nuances here and there. 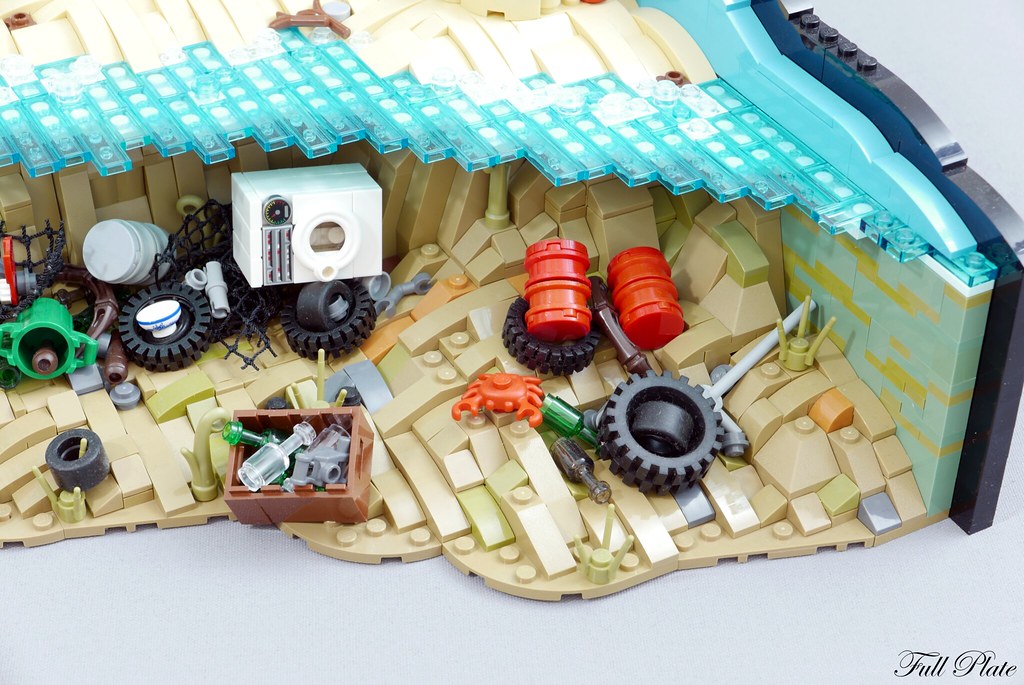 The washing machine is a bit of a centerpiece for the garbage. It was the first thing I thought of to use and I think it turned out pretty nice. Perhaps even too nice for a washing machine that is underwater 😉 The broken bike, the oil drums and the tyres were all things that came to mind when thinking of what to use for trash, and they were pretty easy to add.
The drowned diver was a late addition, and I wasn’t sure about adding it at first, since it added a kind of morbid element to the build, but in the end I decided to include it as I think it highlights the dangers that excessive ocean pollution brings. I also think that kids will mostly consider the addition comical while adults may be the ones considering the real meaning of it.
Lastly I added a lot of random trash like glass bottles, wooden planks, a trash can to fill out the build a bit more. Most of the trash is just lying loose on the ocean floor which means they might fall off or move around during transportation, but as it is just randomly spread out in the first place, the exact positioning of the pieces is not that important. When I brought it for a local exhibition the only thing that feel down was the sun tanning guy and his little table with the drink and newspaper. The palm trees were also surprisingly sturdy although the sway a bit back and forth while moving the build around. 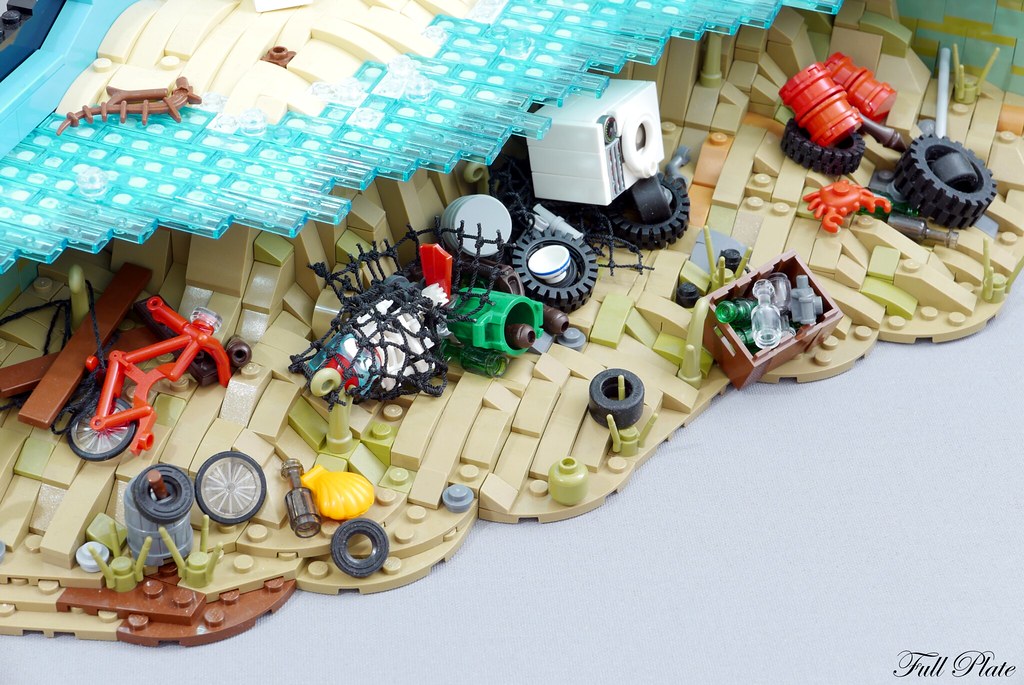 The Swebrick AFOL vs AFOL competition that this was built for is an anonymous competition, meaning that the builder for each entry is supposed to be unknown over the course of the competition. So this build is actually about 2 months old, but as the competition has completed I can now share it openly, which I’m happy about. I’m also happy that the build managed to get first place in the competition, although it was a close call as there were plenty of other good entries competing. 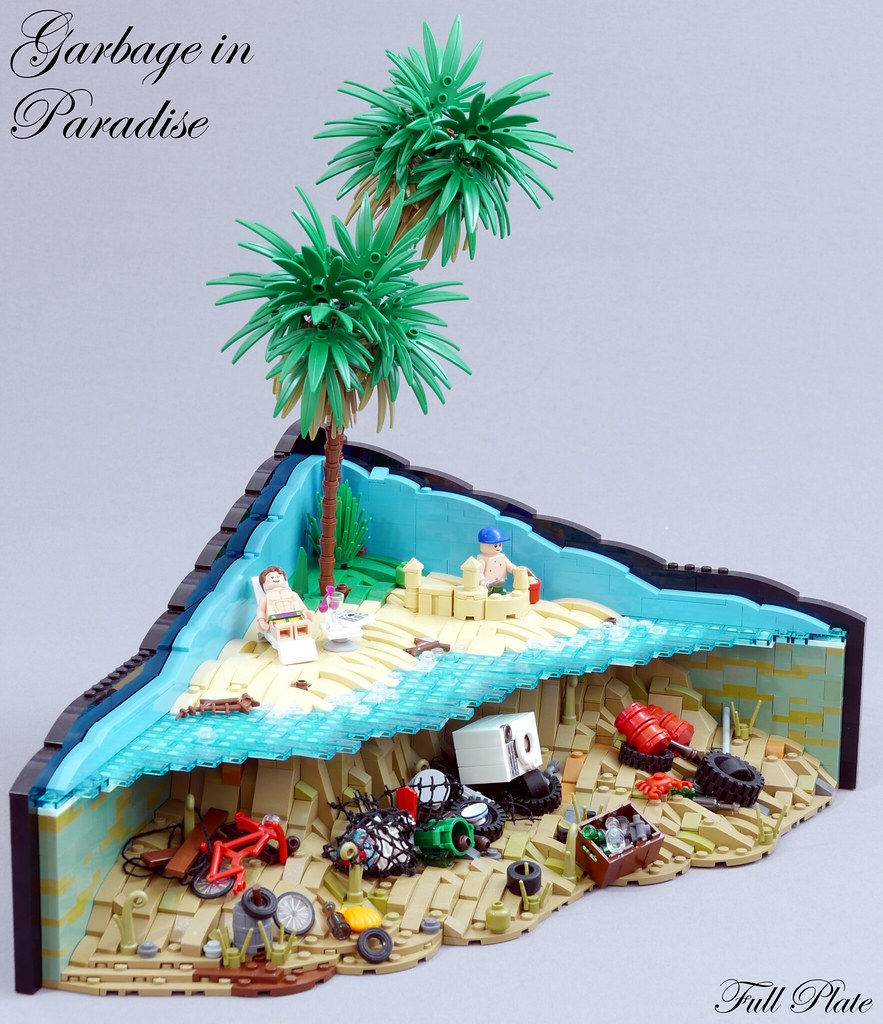 I hope you all enjoy the build! And… don’t dump washing machines in the ocean, please! 😉