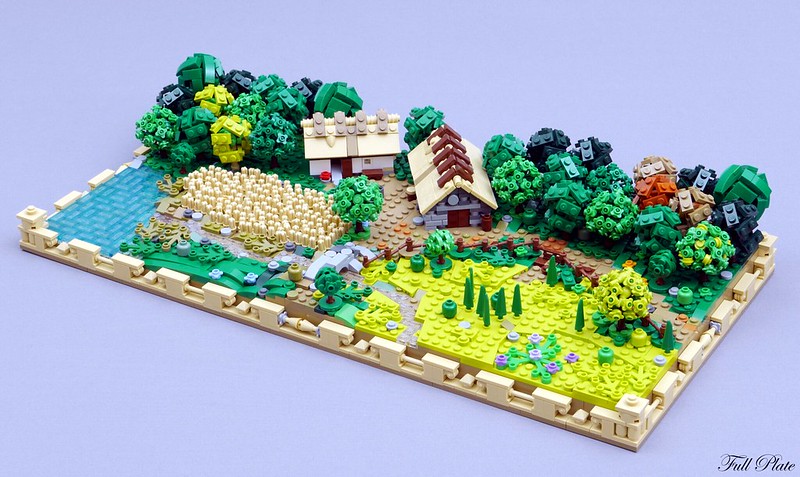 Recently, Rebrick hosted a contest called ‘Help Decorate the LEGO House!’ – a contest where the prize was, among other things, to have your build displayed at LEGO House for 1 year! The contest had two themes: minifigures and nature. Seeing as I love building nature, this contest felt like a pretty good fit and I decided to try to build some entries for it.

For the first entry I wanted to make a scenic microlandscape in a rural setting. Something similar to an old build of mine, Avalonian Countryside. However, the maximum allowed size for entries was 64 x 32 studs, so I had to make it more condensed. I also wanted to utilise some new techniques I had come up with since then.

The central element would be a farm, with a farmhouse and a barn. This would then be surrounded by various rural elements, such as a grain field, a grazing field, a forest, a lake and a creek; all bound together by a gravel road cutting through the landscape. 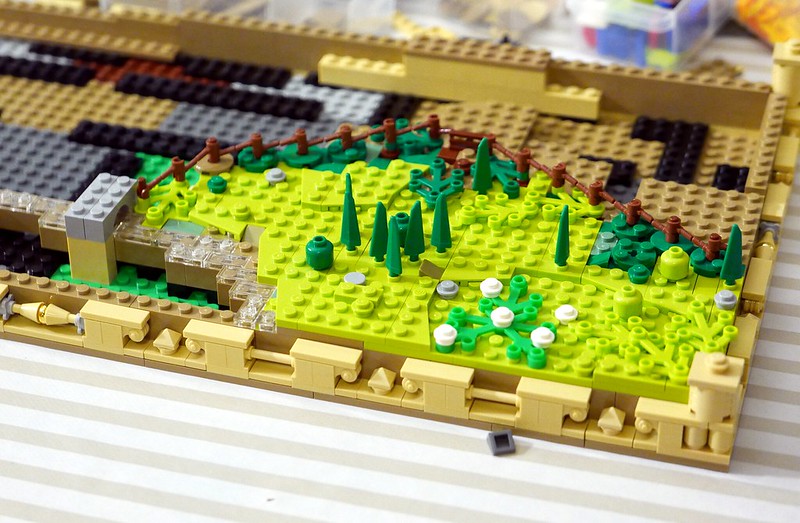 One new technique I wanted to utilise was the minifig hand fence, which I thought would work well for surrounding the grazing meadow. The technique is a bit on the complicated side, so I decided it would be a good place to start, and then build outwards from that.

For the meadow itself I went with lime green, which I feel works well, and it adds a lighter colour to the landscape which I feel is very much needed as most other greens are a bit on the darker side.

While building the meadow I also laid out the creek, running past the meadow, as well as a bridge for the upcoming road. 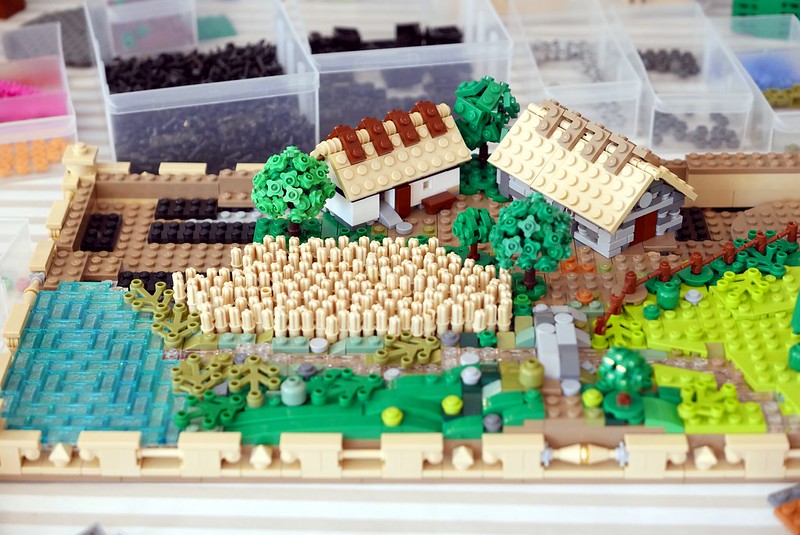 After completing the creek and lake I started on the grain field. I feel the tan technique pieces work well for portraying grain, despite being grossly oversized at this scale. The field ended up smaller than I would have wanted it to, because space was running out.

Next up was the farm, which uses some pretty standard houses. At first I built the thatched roofs with plates, but later switched to tiles, based on some feedback I received on the build.

At this point it was mostly the forest left, so I started positioning out trees here and there to get a feel for what would work, both when it came to amount and colours. 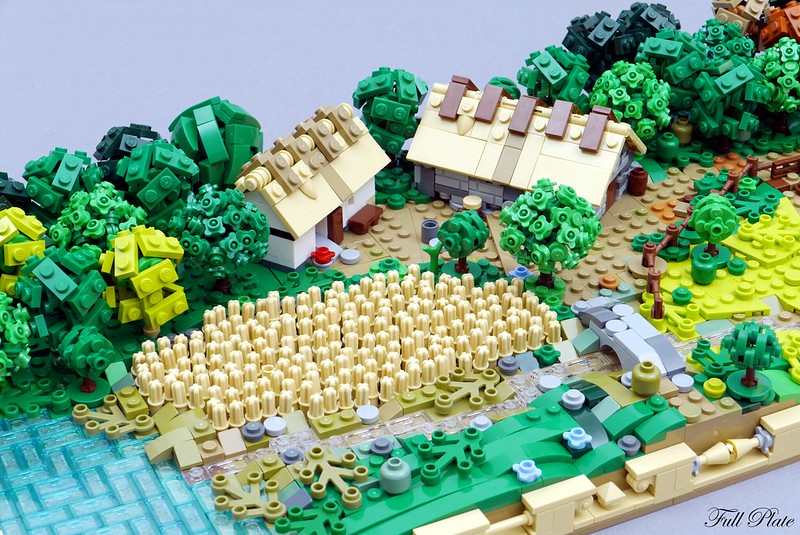 Among my more standard tree designs, I also used some smaller tree designs, to get some more variety in tree size. I decided to have the forest slightly lighter on the left, and then go darker and even a bit into dark tan and dark orange on the right.

When building a dense forest like this, one downside is that it’s pretty much impossible to see inside, but I feel it’s still important to add little details in there, especially along the edges which are more visible. 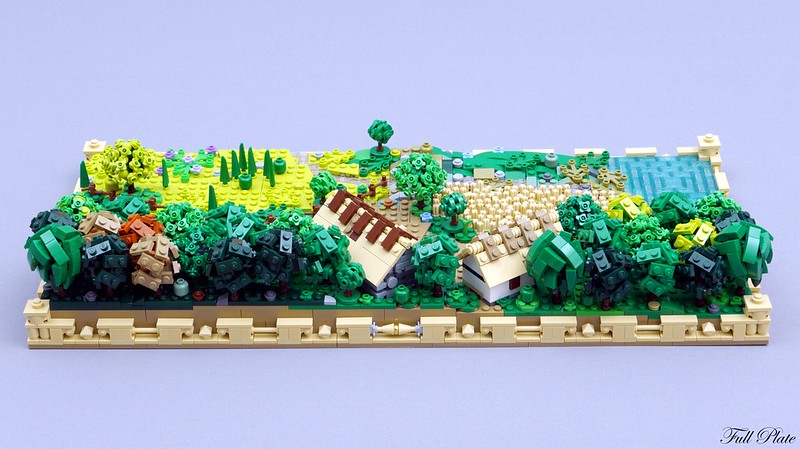 The frame I build around the model is quite on the intricate side as compared to most of my other builds. I wanted to try having a frame that is see-through, so this is what I came up with. In the end perhaps a more plain frame would have been more suitable, as to not take attention away from the landscape. I also had to remove the golden ring, as it is from the Lord of the Rings IP, which was not allowed in the contest. 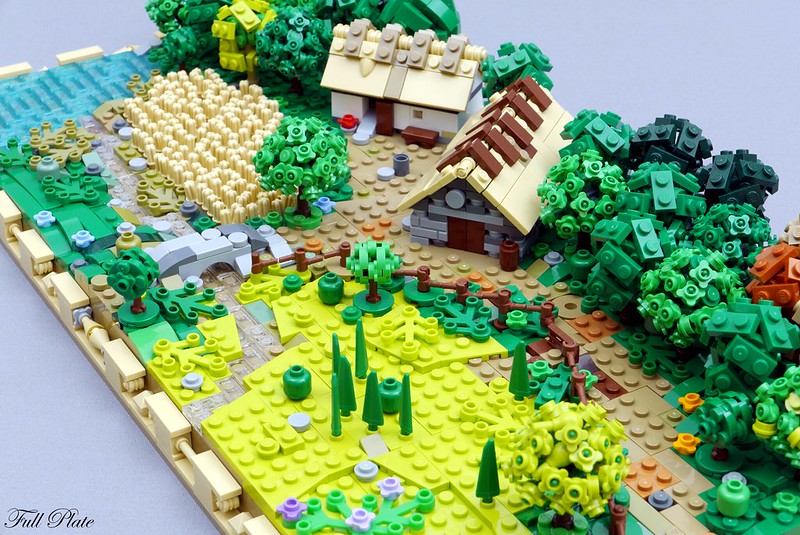 I am pretty happy with the result, and I especially appreciate all the feedback I have received during the building process. This has definitely helped the build becoming what it is. 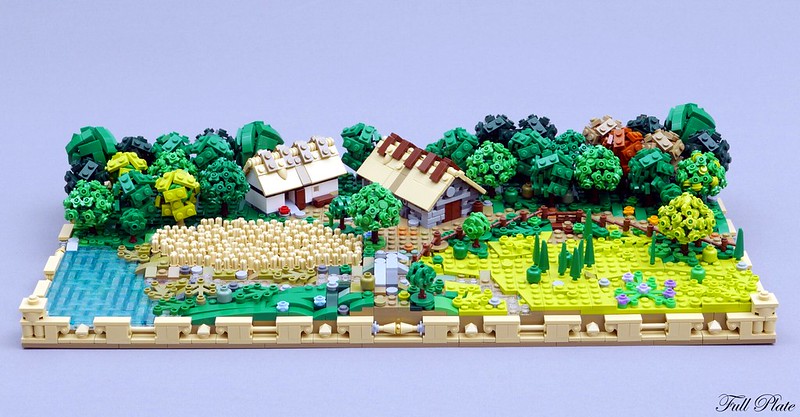 Thank you for checking out the build 🙂 I hope you like it!