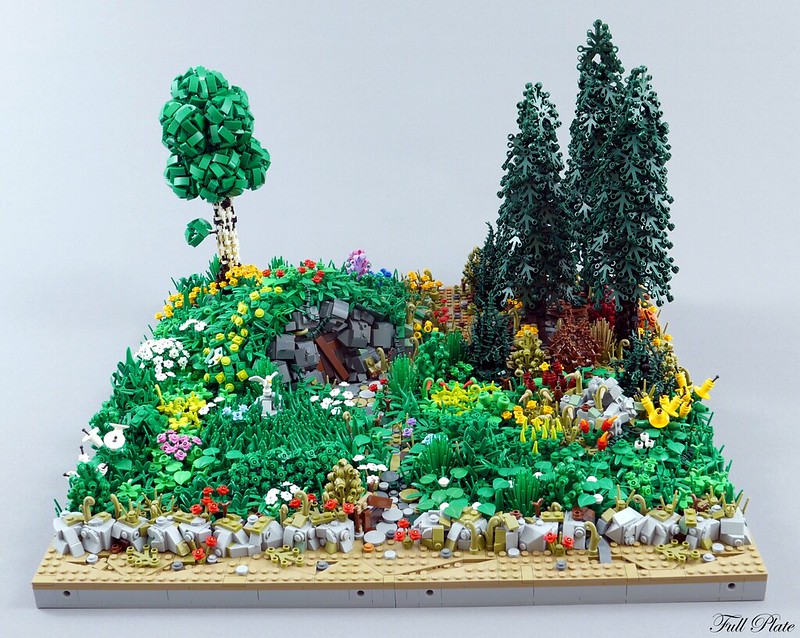 The theme for Swebrick’s Masterbuilder competition was ‘Park & Nature’ this time around, and as that is what I love to build the most, it was pretty natural for me to join 🙂

At first I had quite a few ideas of different kinds of undulating landscapes, but as some of the rules were clarified it turned out that entries needed to have a certain height around the whole build. This was quite a heavy limitation as nature rarely is that flat, so I had to rethink my ideas a bit.

Finally I settled on the idea of an abandoned lot, as it would make sense that it would be flat. I had planned to have a heavily ruined house and perhaps some broken swings on the plot, but in the end I did not include them, as I felt they would detract too much from the theme, which was nature. 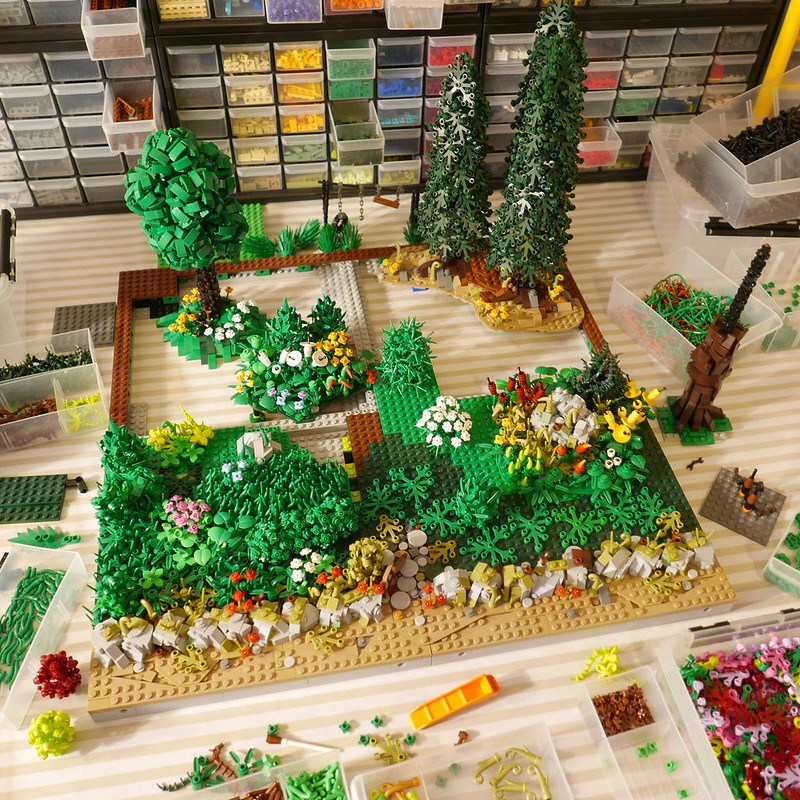 Once I had decided to remove signs of civilisation in favour of more vegetation, I realised the build felt very chaotic and there was nothing for the eye to focus on. So I added a smaller and more discreet man made structure – an abandoned root cellar. This also gave some much need height difference in the build. 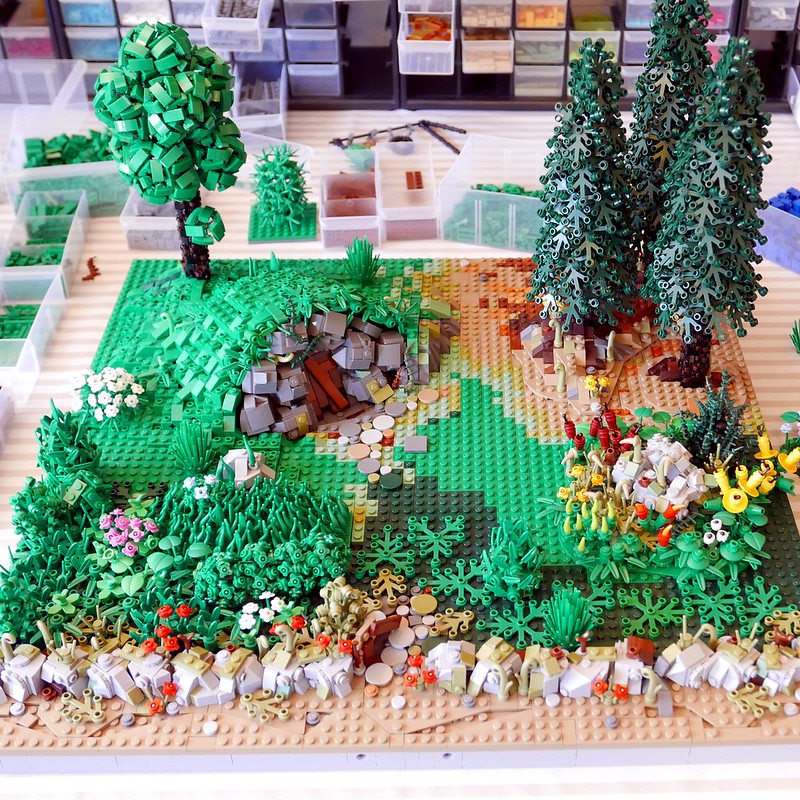 As this was a build where the vegetation essentially had to carry the build, I did a lot of experimentation to come up with a wide range of flowers, bushes and even a couple of trees. For this purpose I put together some small mini-builds to test the vegetation out, to be later incorporated in the full build. 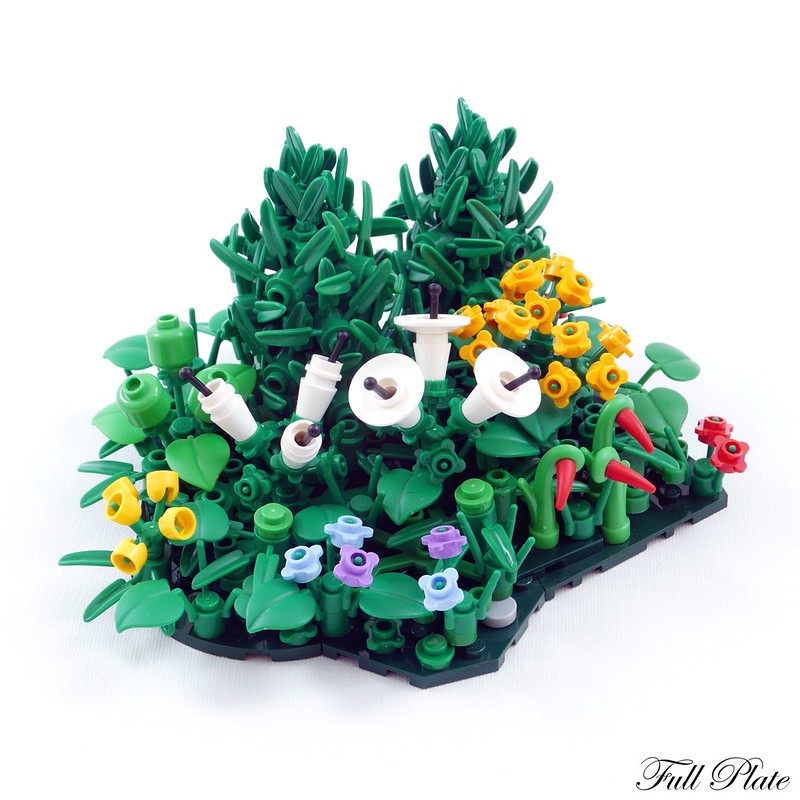 The first mini-build used bright colored flowers on a darker ground. I quite like using both the stick and base of small levers for different kinds of flowers. In the back I built a couple of leafy bushes, based on the bamboo plant part, which I think turned out really well. 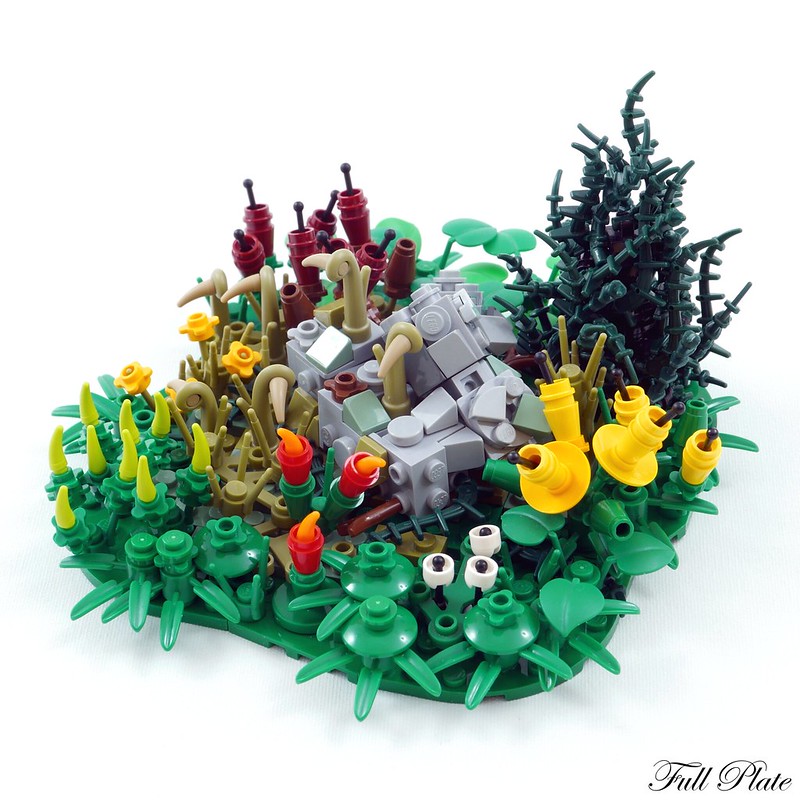 The second mini-build was more centered around a pile of rocks that I intended to include somewhere in the build. Here the colours are less bright and more olive green and dark green is included in the vegetation. Tried out a couple of usages for the small claw piece here. As I intended to have one are with a few pine trees I also made some sort of prickly, dark green bush in the back that I wanted to use for transition into the forested area. 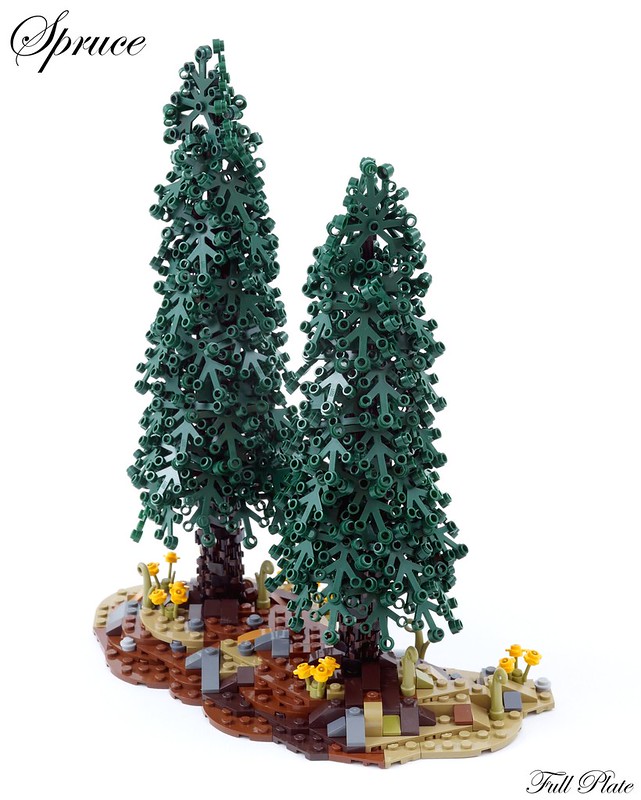 I had experimented with trying to make a spruce before, but hadn’t been able to make something satisfactory. This time I tried layering interlocked leaf elements and it turned out really nice, so I made a small mini-build with two of these trees, with a bit of a drier ground which tends to be the case under spruces. Later I added another of these to the build as well, to thicken up the forest a bit. 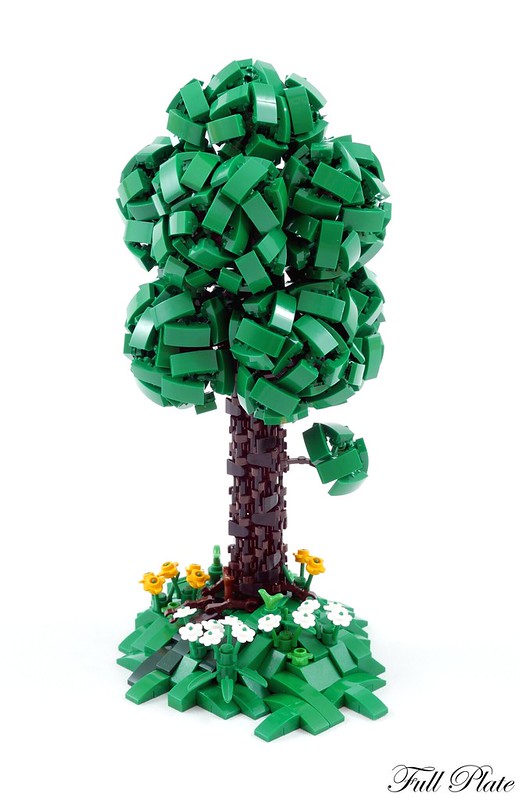 I also wanted at least one tree in the open area, and I had created this tree just a week before, so I decided to try to use it, eventhough I felt the shiny quality of the leaves wasn’t really in sync with the rest of the build. Later, after some feedback from other builders I spent some time trying to come up with a different tree, but I was out of ideas and so I went back to this design again. Although, I did change to trunk into a birch type of trunk instead of the dark brown/black that is seen in the image. 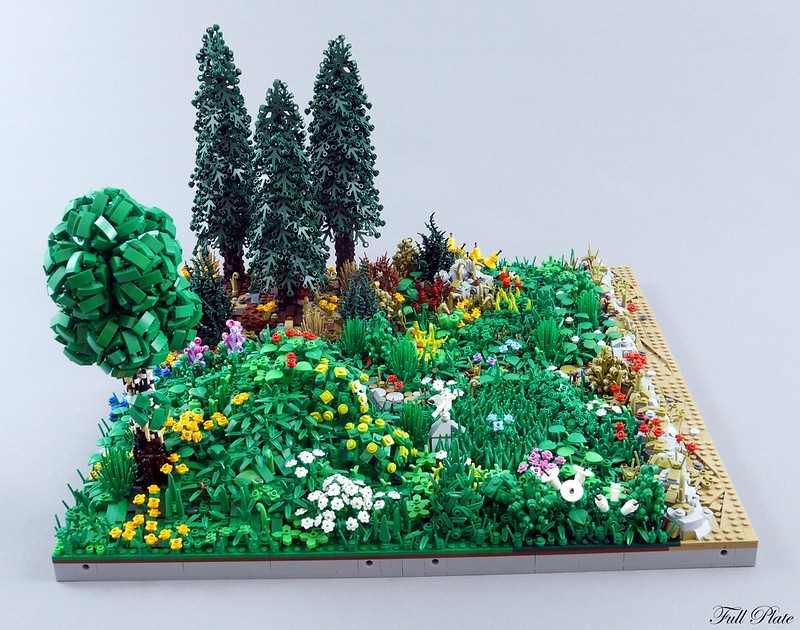 After having done all these smaller builds, it was time to add them on to the main build. During the assembly I had to disassemble one of the foliage builds and spread the plants a bit more evenly across the build. 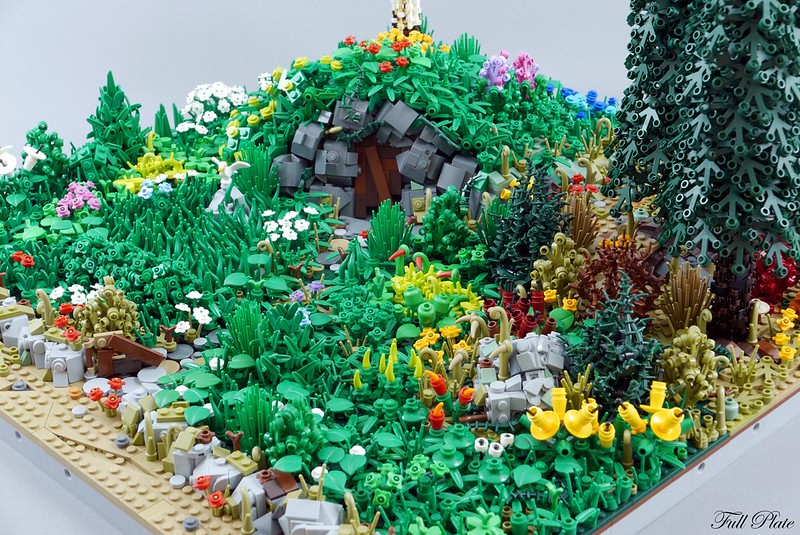 The process of putting everything together became an iterative process, where i filled up the build with plants, then took a step back to see what worked and what didn’t, then I went back to move things around again, and so on. 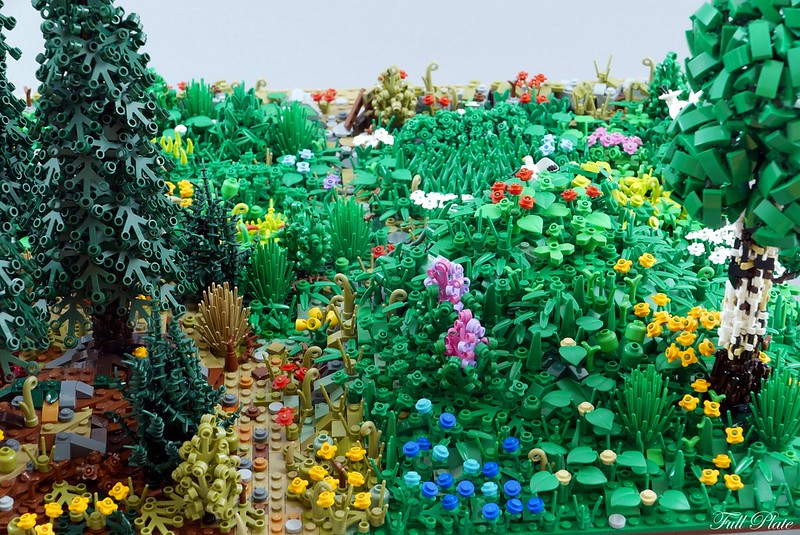 In the end I’m really happy with the build. I feel it captures the very lush, overgrown feel that I wanted for the build. I’m also quite happy with the range of vegetation I managed to come up with. Putting in all the little green bovine horns in front of the cellar was quite a pain, but I like the look. The two green bushes with lavender/pink, located behind the cellar are also quite a favourite as I think they really look like a real plant. 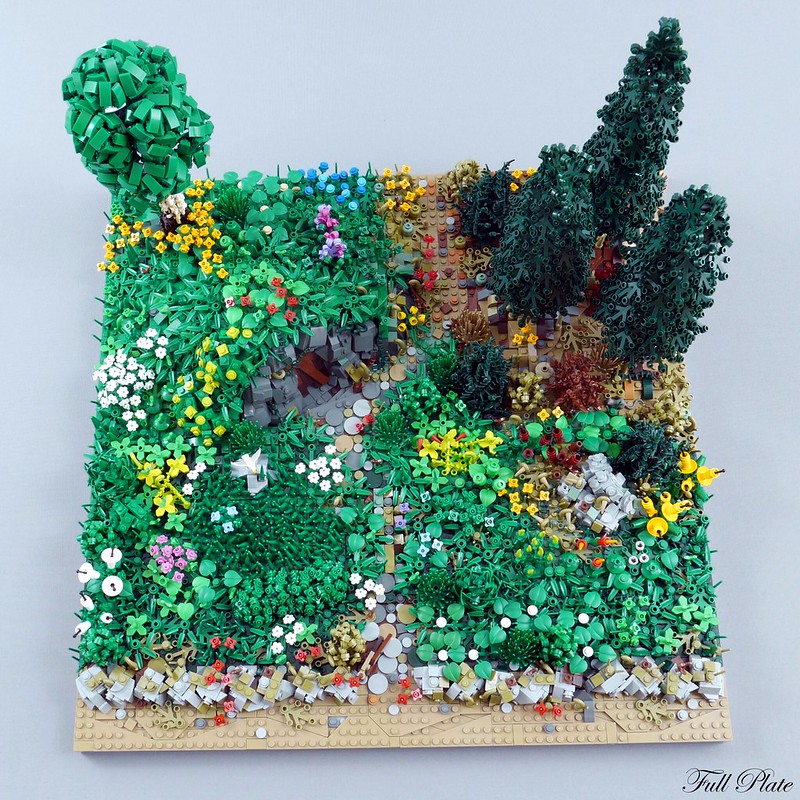 It was quite a fun experience going “all out” with vegetation. Now I find myself low on green pieces though 😉

Hope you enjoyed the build 🙂